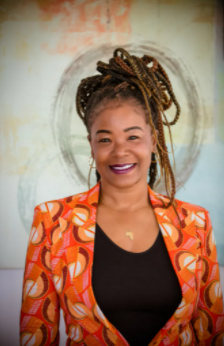 Zawadi Morris said, “There's a lot of advice I can give for anyone that is professionally trying to be successful but my fundamental advice for anyone who is trying to be a writer is to make sure that they're always reading.”

Award-winning journalist Zawadi Morris, of Brooklyn, spoke to students in a library showcase in April about her experience as a founder of an online news forum and her COVID-19 Writers Project.
Morris founded her online news site, The Brooklyn Reader, also known as BK Reader, in 2013. She decided to start a news site because there was no news being reported on the community.
Morris told the audience about her upbringing in a black family who integrated a predominantly white suburban neighborhood in Chicago, where she experienced racism. She said she was inspired by her own experience and became determined to be the voice of people who are overlooked.
Morris was awarded a grant from the Pulitzer Center to put a vision in action that would become the COVID-19 Writers Project. Morris said she created the project because she wanted to discover how COVID-19 had affected the lives of all kinds of people, including people of color and those who live on the margins of society.
“After the project was completed, Pulitzer asked me if I wanted to speak to students because there’s so many teachable moments in it,” she said. “My favorite part is speaking to young folks about this project.”
When asked what the most remarkable part of the project was, Morris said it was interviewing the people of her community and “hearing their stories and seeing how it was just a few things that separate me from being them.”
Morris spoke about the homeless people of Brooklyn who took part in her project.
“They were well spoken, very intelligent and smart. They had just fallen on hard times,” she said. “The only thing separating me from them is falling on hard times.”
Out of all the groups Morris interviewed which included doctors, authors, professors, students, and more, she said that the homeless people were the most positive.
“They’d talk to me about what they were going through and it would break my heart but yet they’d be smiling through it,” she said.
One topic Morris emphasized was about being a writer for her community and how much representation matters.
“There were community members that said ‘we never had anyone who related to us write for us the way you did,’” she said. “‘The way outsiders who don’t know us and know our issues and can understand our experiences, the way they report on us is quite different from someone who is from here and knows who we are.’”
Morris said it is critical for a community to be heard.
“When I had the opportunity to write for the community it was a very different type of writing,” she said, “and it had a certain type of nuance and cultural sensitivity that didn’t exist coming from other writers that don’t really understand the community.”