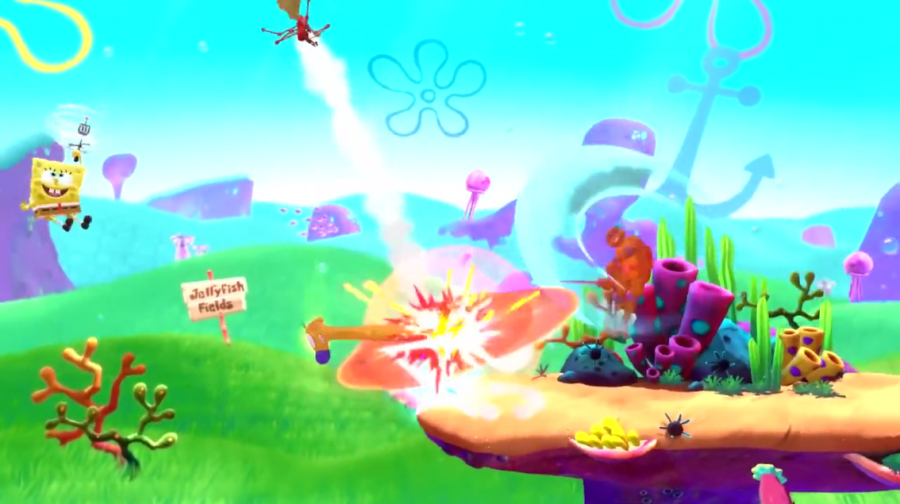 Only a game like this could let you see SpongeBob, Leonardo, Zim and CatDog all on the same screen fighting each other.

Out of all of the games released this year, one that brought both shock and excitement was Nickelodeon All-Star Brawl. Developed by Ludosity and Fair Play Labs, the game is the first to introduce Nickelodeon characters such as SpongeBob, Reptar, Zim, and more into a platform fighter, similar to the game Super Smash Bros. Before the game’s release, certain key aspects gathered the attention of people in the fighting game community such as the addition of Rollback Netcode, where the game will rollback if it detects a desynchronization between two players. As more and more details about the game were revealed, excitement for the game increased. Finally, on Oct. 5 the game was released.

Gameplay is similar to that of the platform fighter in Smash, however, the game has changed to existing mechanics along with adding new mechanics to give it it’s own identity. One major difference is how there are three types of attacks, Light, Strong and Special. These are very similar to their Smash counterparts. However, Strong Attacks are able to reflect projectiles, and have a Rock-Paper-Scissors mechanic. Grabs also are significantly different as you are able to carry around opponents, grab and throw them in the air, and even grab projectiles. There are other mechanics as well, such as Strafing, which locks you from turning around allowing you to do retreating attacks, air dashes, and more.

In terms of how the game feels to play, it feels fast and fun. The movement options allow for creative combos, and each character has a lovingly crafted moveset that references their shows. From SpongeBob using his hydrodynamic spatula, to Ren and Stimpy being able to throw bouncing logs, it’s a fun experience for fans to point out each reference. When played online, the game works exponentially better than Smash Ultimate’s online with Rollback helping the matches feel smooth as butter, although it’s still highly recommended to get a good internet connection to have the best experience.

In general, the game’s visuals are good, but there are some problems, notably with characters like Danny Phantom. The absence of alternative costumes makes it difficult to distinguish between players if they are playing as the same character. That being said, the developers have acknowledged this and confirmed that alternate costumes will be part of the game in the future.

Along with the 20 characters already in the game, two more characters are confirmed to be added soon, and even more will be coming in the future.

While Nickelodeon All-Star Brawl has some rough spots in terms of character balance, visuals and more, it is a solid game that’ll please not only fighting game fans, but Nicktoons fans as well. Thanks to the developers’ transparency, the game will be able to be improved and adjusted as time goes on.