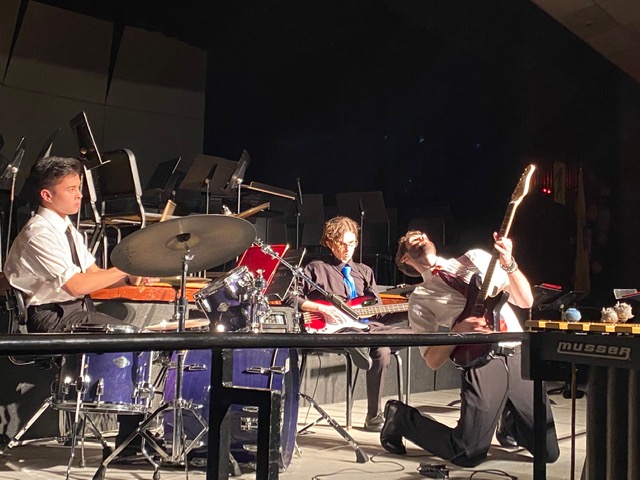 Fay, Carey, and Goodnick were rocking out while performing selections from Guitar Hero. (Photo By Sofia Senesie)

Band students every year perform their annual Prism Concert to raise money for their Music in the Parks competition and choir competes as well, at Hershey Park in April. This year, they were able to host their concert on March 4, which is a marching band pun. This year’s theme was media.

Selections played ranged from playful marches suitable to March 4, of which were songs and medleys from popular video games, TV shows, movies, and a lot more.

One group that got the crowd rocking consisted of seniors Joe Carey on the drums and James Fay on the electric guitar with junior Henry Goodnick on bass playing a medley of selections from the Guitar Hero series.

“We did a medley of a bunch of songs from the Guitar Hero series,” said Carey. “I’d definitely say my favorite one was Take Me Out by Franz Ferdinand. Jimmy actually picked this one out, but I loved it the most out of the others.”

He continued, “I also loved playing that loud, driving beat that just gets people moving.”
Goodnick also enjoyed the drive of the beat.

“I think my favorite part was getting into the groove. Because it wasn’t a formal scenario, we got to just rock out,” said Goodnick. “Jimmy went full metal, which made it even more epic. We got a huge reaction, which I was not expecting.”

Fay, too, was grooving.

“I’ve been looking for an excuse to show off on guitar,” he laughed. “All the applause was awesome. I love the rock genre.”

It was a playful concert with a plethora of groovy selections for all ages. Be sure to wish Carey, Fay, Goodnick, and their comrades good luck as they march forth into their Music in the Parks competition this April.